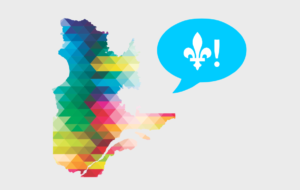 We are the link between your business and the French-speaking Québec market. Our native translators understand Québec's culture, business ecosystem and language to produce top quality work that will help your business succeed in this unique market.

► English to French Canadian translation is one of our core services.

We offer translation services for several types of media, such as:

We work with standard translation industry software such as Smartcat, memoQ and Lilt.

As part of our Content Creation and Strategy services, we also offer translation in other languages.

Canadian French, sometimes called Québec French or Québécois, is spoken by 20% of the Canadian population, or 7.2 million people. Although most Francophones are located in the Province of Québec, French speaking communities exist in all Canadian provinces, particularly in Ontario and New Brunswick.

To succeed in any market, businesses must not only speak the language of its people, but also understand its unique culture.

French Canadian culture has less in common with France than is commonly thought. Rather, it can be described as a hybrid of French, Anglo-Canadian and American influences.

According to Cracking the Quebec Code, Francophone Quebecers differ significantly from the rest of North America in their attitudes about finance, business relationships, risk tolerance, decision-making and the way they respond to advertising.

About the Québec Market

According to the Global Startup Ecosystem Report, Montréal has one of the best startup ecosystems in the world, excelling in Artificial Intelligence (AI), Video Game Development, and Advanced Manufacturing and Robotics.